skip to main | skip to sidebar

"In the original script there was no such ending. From the very beginning we were thinking of how to end this film, how to find this image that would just close the whole story. It was Roman’s idea, two weeks before we were supposed to shoot that scene. We wanted an evening, magic hour shot, mysterious and dark. And we didn’t want to show, we wanted to suggest that something dramatic may have happened. We took two or three takes and the last take was the best."
–Pawel Edelman, cinematógrafo de "The Ghost Writer"

"John Hillcoat, from the beginning, was very confidant in me. I could work with a lot of freedom. This shot was an improvisation. It wasn’t planned. The movie doesn’t have too many interior scenes and this was something we discovered right there on the set. Most of the movie wasn’t storyboarded and we were really glad that this was a shot that could show like a shadow without a specific shape that is being erased and it reflects the character and what he’s feeling at that moment and accentuates the drama. The water is, in a sense, erasing the past. I think it’s a really powerful moment in the story." 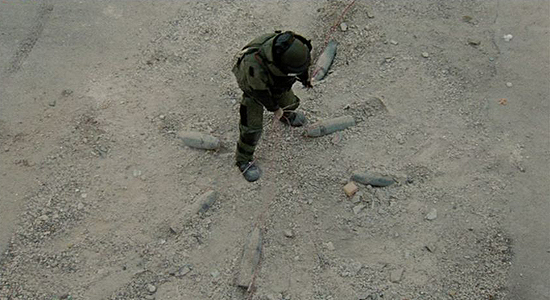 "It’s very informational in a lot of ways.  It’s kind of a symbolic image as well, which I think gives it its strength.  The obvious thing was to show this from above to give this kind of web surrounding him, which I think is metaphorical for his position, but also the moment of ecstasy at the center of this thing, it’s like he’s caught in a spider’s web.  And it’s almost like an impossible place to be, so I think it’s a little bit mystical as an image.  You wouldn’t get yourself in the center of such danger, but that was obviously the character.  He was prepared to do that, which made him different to the other guys, and I think ultimately that’s what the film’s about."

"The first time I spoke to Darren, it was very clear that the inspiration for the visuals of the film was in the work of the Dardenne brothers, who directed “Rosetta” and “L’Enfant.”  That first shot was going to be much more complicated, a low, hand-held tracking shot that was going to move in on Mickey and turn around and start to discover his face.  We tried it and Darren decided it was much too complicated.  We decided to leave the camera in the back of the room with Mickey very small in the frame with his back to us and I think that right away it established the isolation of the character."

"This shot can be seen as a compressed example of how we tried to treat the story throughout the film.  It pretty much followed the ideas Tomas and I had about how to show cruelty, action and supernatural elements and where to put focus.  We wanted to be close on Oscar and the way he experiences the situation, as well as have a platform to tell everything that happens in one shot.  I am not sure if it is the most “pretty” frame of the film, but it was very exciting to try to unravel and solve the puzzle of all present elements in this shot, technically, as well as emotionally.  I am very proud of Tomas and the way he dared to go with a climax that is so violent, but restrained and subtle at the same time."
– Hoyte Van Hoytema, cinematógrafo de "Let the Right One In"
* depoimentos recolhidos por incontention.com
Publicada por Joao Araujo