skip to main | skip to sidebar

Bigelow: My Film Does Take a Stand -- Against Futility of Iraq War (thewrap.com)
-- I keep reading about how the movie doesn’t take a political point of view, but it seems clear to me that you have a pretty strong point of view. As you say, it's a hellish situation and we have no business sending our men into it.
Bigelow: Well, that’s certainly my feeling. I’m a child of the ‘60s, and I see war as hell, and a real tragedy, and completely dehumanizing. You know, those are some of the great themes of our time, and we made a real effort to portray the brutality and the futility of this conflict.
-- So you would say that the movie does indeed take a stance?
Bigelow: I guess my feeling is that graphic portrayals of innocent children killed by bombs, and soldiers incapable of surviving catastrophic explosions … I think that’s pretty clear. And then also, to add to that, the movie opens with a quote, “The rush to battle is often a potent and lethal addiction, for war is a drug.” So it’s definitely taking a very specific position. (...) And also, it’s been extremely gratifying that it allows a kind of exposure to a film that is a tough, graphic portrayal of a very tough subject, America’s most unpopular war. And I’m gratified by the fact that all of this attention that comes with this circuit, has served to remind us that this war is still ongoing, and this conflict is now nine years out in Afghanistan, and eight years out in Iraq. It’s not only America’s most unpopular war, but I think it’s arguably its longest engagement. 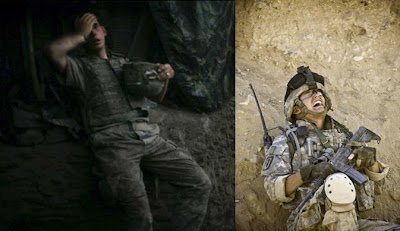